After seven months of closure, the children’s program was restarted in November. We organised a trip to Angarike Maala for the children and they did a walk around on the land. They identified various flora and their uses and then sang songs before having a picnic there.
November 23rd to 26th 2020:
EMBROIDERY TRAINING BY Ms. MISBA WADEHRA 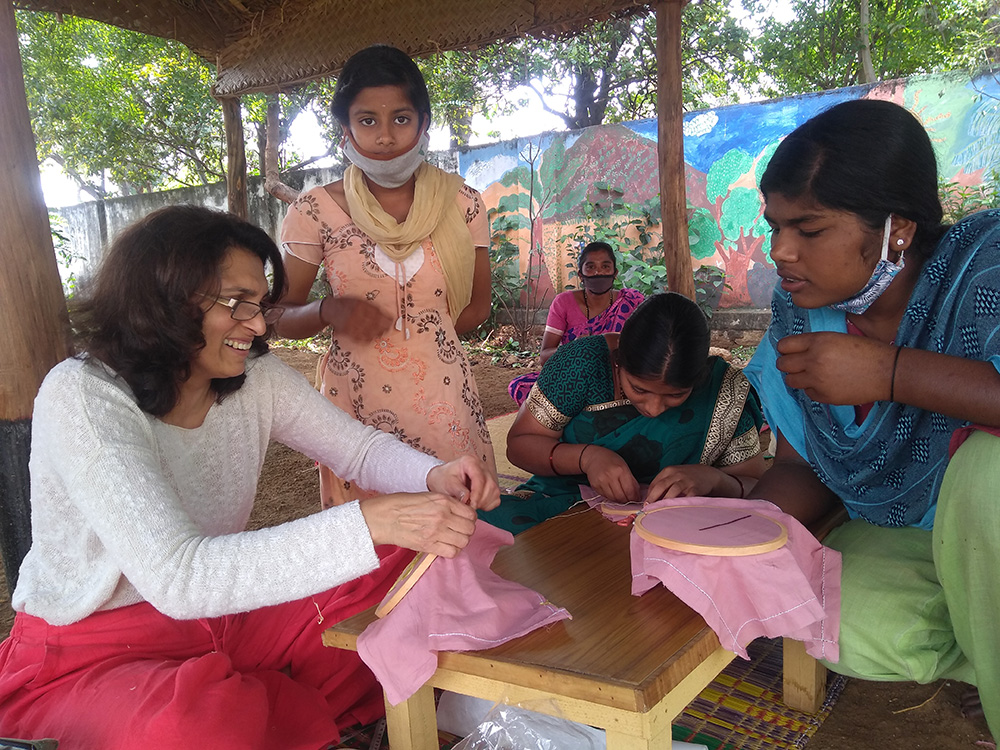 As part of the Covid relief program, we had organised for some young women from Nagavalli village to participate in an embroidery training program. The resource person was Ms. Misba Wadehra, a person with several years of experience in tailoring, embroidery, and the garment industry. She trained the women in the basic skills of embroidery and gave them personalised inputs to improve their skills. The work will be linked to HONNERU and the products once completed will be sold through HONNERU.
November 4th 2020: ILP ALUMNI MEET 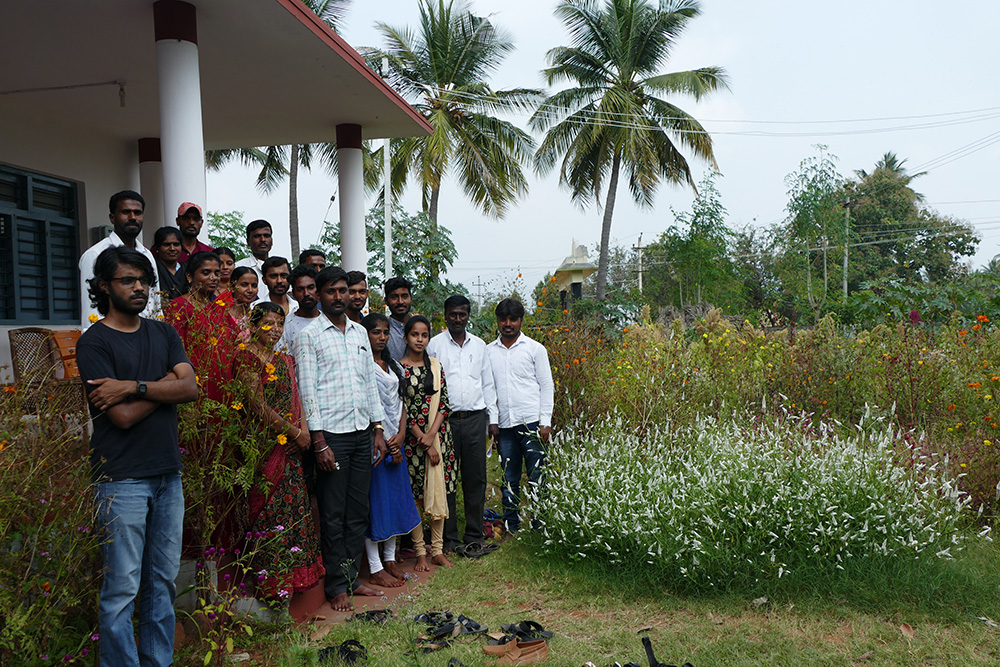 After a gap of nearly six months, enforced by the Covid restrictions, the ILP alumni met for a day. They not only shared their experiences and work matters but also engaged in a discussion on preparing for the forthcoming panchayat elections. They then visited Angarike Maala and enjoyed a detailed tour of the place and discussed the methods by which land could be restored and soil, seeds, water and agro-biodiversity conserved.
OCTOBER 14 and 15th 2020:
CELEBRATING INTERNATIONAL FARM WOMEN’S DAY 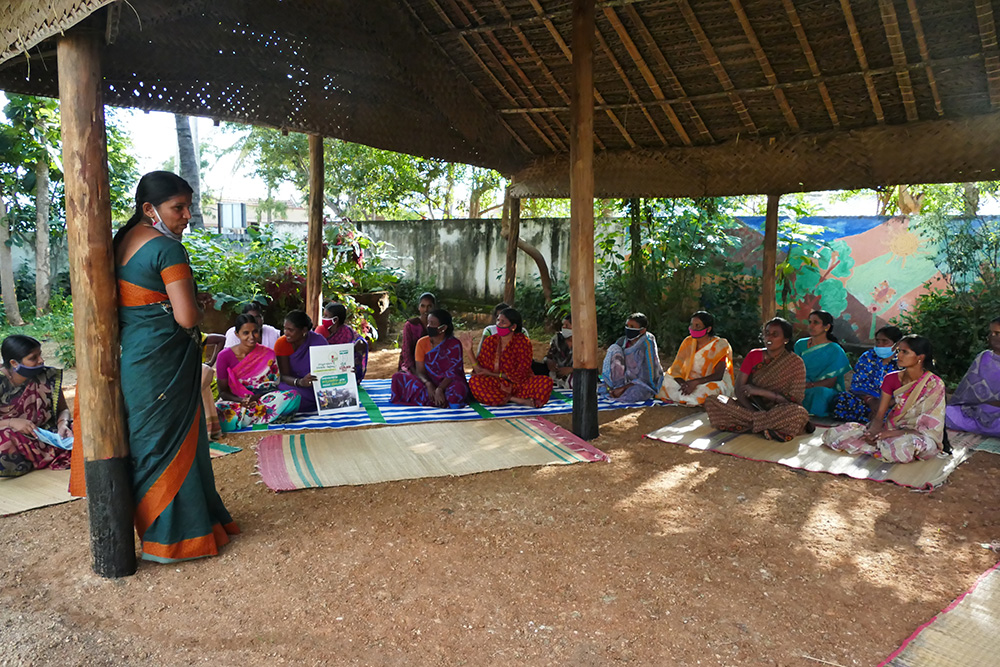 This year we celebrated the International Farm Women’s Day as a way to highlight the issues of women’s role, contributions and rights to land. We first had discussions on these issues and distributed pamphlets made by Ms. Sharada Gopal on these issues. On the 14th and 15th , we took the women of Puttanpura village and Nagavalli village respectively to Angarike Maala and after a round of the land, had a discussion on these and other issues. The women immensely enjoyed being out on the land and spoke about the multiple problems they faced in accessing rights to land.
SEPTEMBER 12th, 2020:
INAUGURAL OF ‘MOTHERS’ GARDEN AT THE NAGAVALLI PUBLIC HEALTH CENTRE
Based on discussions with some of the women in Nagavalli, who were keen on having a collective garden for which they would take responsibility, we initiated work on clearing and cleaning the open space around the Public Health Centre at Nagavalli. The women planted tree saplings around the building and in the vegetable garden area, sang a few songs, and discussed how they would take turns to water and care-take the garden. 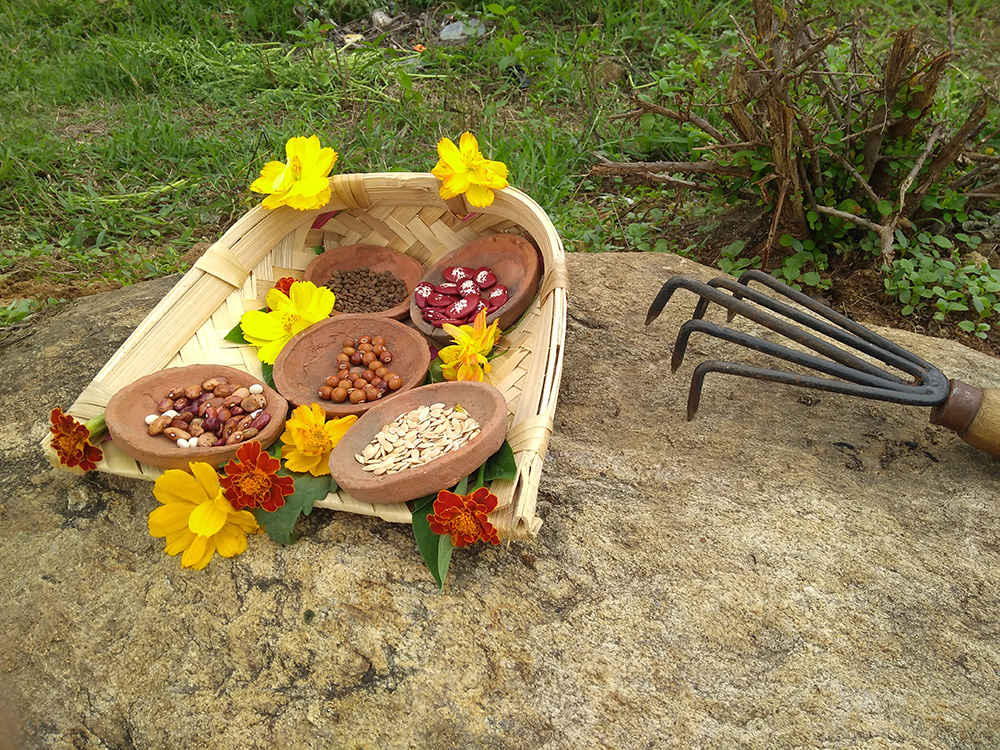 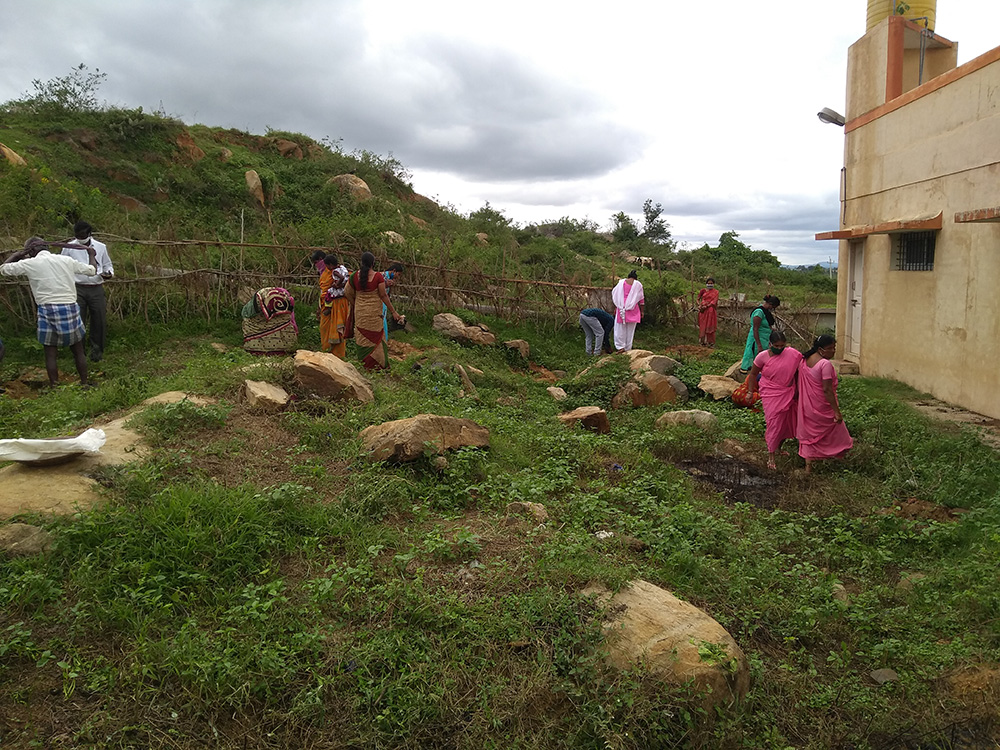 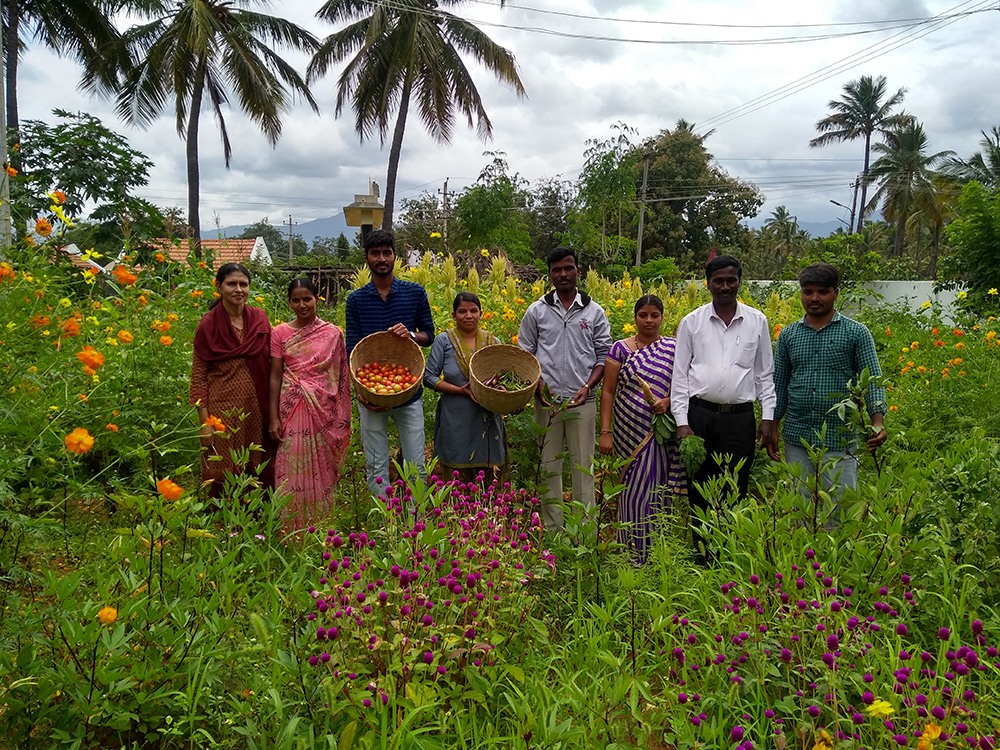 The home garden was in full bloom but we could not have many visitors or organise the annual garden open day. But, Sunita Rao, to whom we credit the garden and seed work, visited us and spent the weekend. A small home-made film shows her in the garden with the team.
June 5th & 6th: 2020: WORKSHOP ON SOILS 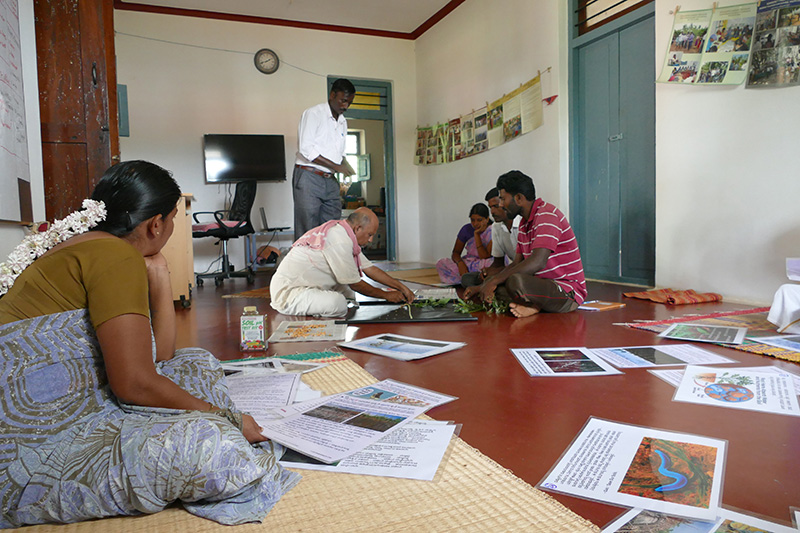 On June 6th and 7th, we had a two-day workshop on ‘living soils’. Vasu alias P. Srinivas was the key resource person and he engaged the group in intense and interesting ways to understand, relate and manage soil. Apart from the PUNARCHITH team members, a few farmers from the area attended the workshop.
MAY 2020

As the C-19 lockdown continued, and village residents grew restless with the lack of jobs and income, we initiated the MGNREGA works at three of the villages where our youth are active. Starting with only a few hundred people who enlisted for the work, by the end of the fortnight there were several hundred in all. In Nagavalli, about a thousand people worked on clearing and dredging various small lake beds around the village. In Doddmole village, the people worked on a large lake and cleared it off the weeds and debris. In Aralipura, several women were pleased to get the work and enlisted for the week long work. Payments were made in installlments and most have received payments. At the end of the fortnight approximately 16000 man hours of work were completed in the three villages.
ANTONIS BRESKAS 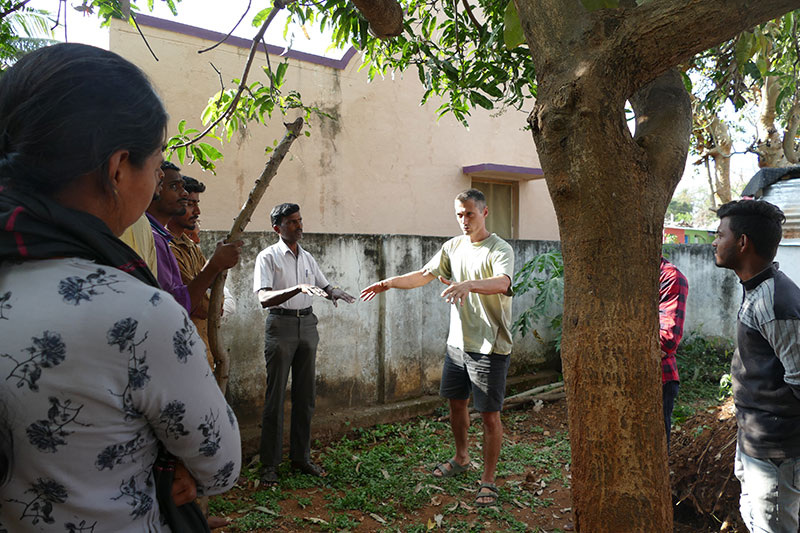 A visiting volunteer from Greece, Antonis has skills in several domains such as permaculture, hand-made soap-making, seed conservation etc. He spent two weeks with us between January and February 2020 and trained the youth in several of these skills including the making of ‘hot compost’. The youth were particularly pleased to meet and interact with Antonis. He also gave us advice for improving the land at Angarike Maala. We hope to see him again at our centre.
2021 Events list
2019 Events list
2018 Events list
2017 Events list